Thaumoctopus mimicus, better known as the Indonesian Mimic Octopus, is one of my absolute favorite creatures. Other octopuses artfully blend into rocks and seaweed while stalking their unsuspecting prey, but the Mimic skillfully shape-shifts through a cast of bold, flashy, even frightening animals. Would-be predators retreat from a convincing deadly sea snake, a menacing lionfish with venomous spines displayed, a boldly cruising open-water stingray or poisonous flatfish, or the bullet-fast claws of the mantis shrimp. Meanwhile, a lusty male crab is fatally attracted to an alluring but murderous ‘female’ crab, and at the end of the day, our little octopus male repeats this deception on his own species, sneaking (in drag) to mate, right under the nose of a larger male. This mimic has been observed imitating at least fifteen different species.

The mimic octopus adapts to a surprising array of situations with a remarkably flexible strategy: it mimics the successful adaptations of other species. Humans, too, have hit upon this strategy: Biomimicry allows us to consciously imitate the special powers of other species, broadening our ability to adapt to novel situations. And, like the octopus, we require flexibility, thoughtful use, and speedy action (in the face of impending climate change).

Many organisms copy others for personal gain. Some use the strategy to avoid predation. The viceroy butterfly mimics the unpleasant tasting monarch, hoping hungry birds will pass it by. The harmless king snake mimics the deadly coral snake in bold warning coloration. Ground squirrels rub their tails with rattlesnake skin sheddings, waving them vigorously when the snake approaches: beware, I am a bigger snake.


Others use the “wolf in sheep’s clothing” approach to lure their prey. The Alligator Snapping Turtle opens its pitiless maw, wiggling its pink tongue suggestively like a soft juicy worm. The assassin bug masterfully plucks the strings of a spider web, imitating the spider’s struggling prey until the hunter rushes out, becoming the hunted. Parasitic larvae of Lampsilis shellfish imitate small helpless fish, inviting ingestion by larger fish. The larvae pass through to the predator’s gills, upon which they dine until adulthood.

Some species pretend to be females of other species, luring careless males in for a dangerous liason. (And yes, it is always the male who is tricked). Bolas spiders emit a chemical much like the female Psychodid moth’s sex pheromone. When the male comes in to cruise her, he flies headlong into a sticky, dangling decoy. 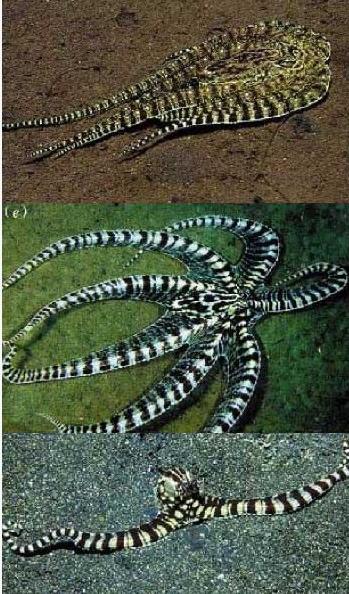 Mimicry is also used to enhance reproductive success. Some males pretend to be females of their own species, allowing sneaky access to mates. Even plants have this trick down: orchids specialize in masterful imitations of female insects, luring males into elaborate acts of cross-pollination. Parasitic cowbirds use mimicry to secure quality daycare for their offspring, laying eggs that look like those of other birds. The changelings hatch in the host nest, and promptly push the native eggs overboard. The unsuspecting native mother cares for the parasitic brood as if it was her own.

By now you are probably thinking, “These species are poor examples for us! They only mimic to eat and avoiding being eaten, and to make more of themselves! We want to mimic other species so we can survive profitably and sustainably.  What can these other species possibly tell us?
Maybe it’s true. As humans, we wish to mimic abstracted strategies to make a living that supports us for the long haul. Generally, we aren’t seeking to deceive a third party (though biomimicry can certainly take us this route if our “survival challenge” is a biotic one, such as managing malaria or preventing birds from flying into windows). In addition. we learn to mimic strategies within a single lifetime, or transmit our discoveries culturally to the next generation. Surely the octopus and the other organisms we have mentioned are going through the motions of a hardwired, if elaborate, genetic dance. How far can the octopus’ strategy inform our own need for a radically flexible adaptation, one that can shift with the prevailing winds of both the marketplace and climate change? 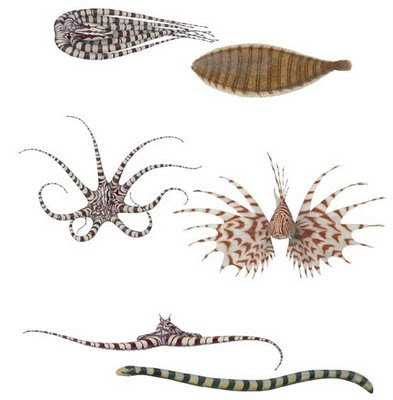 In Biomimicry, it’s important to go beyond the superficial and delve deeply into an adaptation’s biology. Let’s do that with our Mimic Octopus: no, it does not learn its duplicitous trade from a caring parent or teacher. But it is deucedly intelligent nonetheless, capable of advanced reasoning and even self-awareness. Perhaps it acquires its methods the hard way: through a short lifetime of trial-and-error.

The octopus brain is small, no larger than that of a lizard (pretty remarkable, considering that of its’ clammy relatives have no brain at all). Researchers like “relative brain size” as a comparative measure of intelligence across unrelated species. This puts the octopus around the level of a komodo dragon. But wait. It turns out that fully three-fifths of the octopus’ brain cells reside in its arms…along with taste buds and photoreceptors remarkably similar to those in our eyes. Their whole body is an inside-out decentralized brain, with sensory organs built right in! If an arm is detached by a predator, it will still attempt to hunt and grab prey, stuffing it greedily to where its mouth once was. Octopi seek and store tools for later use (they plan suits of armor and doors for their dens), have distinct moods (red for rage) and capricious whims (squirt the cute keeper). They even play with balls and bottles, have a sense of self (implied by their thoughtful mimicry of other species), and can solve virtually any puzzle if there is a juicy crab at the end of it. Childproof Tylenol bottles? No problem. They are notorious midnight aquarium marauders, sneaking into other tanks nearby, returning home once satiated with neighborly concern. These are the hallmarks of true intelligence, which we associate exclusively with a select cadre of long-lived, social mammals and birds. 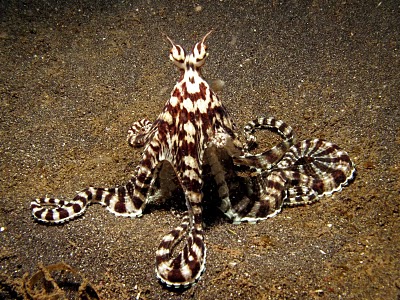 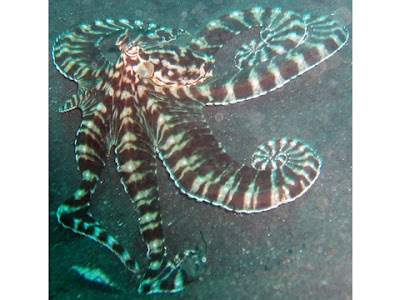 Perhaps it is informative to ask why the mimic octopus has this advanced ability. What evolutionary function does it serve? The consensus among evolutionary biologists has been that intelligence allows members of long-lived social species to remember and differentiate one another for complex political maneuvering. Elephants, dolphins and whales, humans and other apes all fit this pattern, as do parrots and crows. Octopuses are neither long-lived nor social, and do not engage in complex political machinations.

Why, then, does their intelligence converge upon our own (convergent evolution being the development of similar adaptations in unrelated species due to similar environmental pressures)? Why does the octopus, a creature so alien to our sensibilities, whose ancestors had no brains or eyes or even backbones, have intelligence possibly rivaling a rhesus macaque?

Soft-bodied and vulnerable, the octopuses long ago gave up the security of life in shells, much like our own ancestors gave up a sheltered life among the trees, covered in protective fur, doubled over in a gut-guarding crouch. For both families, the reward has been radical expansion and access to an untold wealth of open niches. Octopuses occur across the globe, from shoreline to abyss. (Old folks in the Northwest even spin woolly yarns about the elusive Pacific Tree Octopus). The price of admission for us both has been a hat full of clever tricks.

Octopuses and their relatives have maintained their way of life for some 300 million years, while we are new to the game (less than 50,000 years). To accomplish this hat trick, the octopus has adopted the same flexible, thoughtful, situation-specific mimicking of champion species that we have only recently hit upon. It’s a brilliant strategy, and one that we are eminently pre-adapted to use. If we move quickly, we just might find Homo mimicus around 300 million years from now.
Posted by Unknown at 11:33 PM