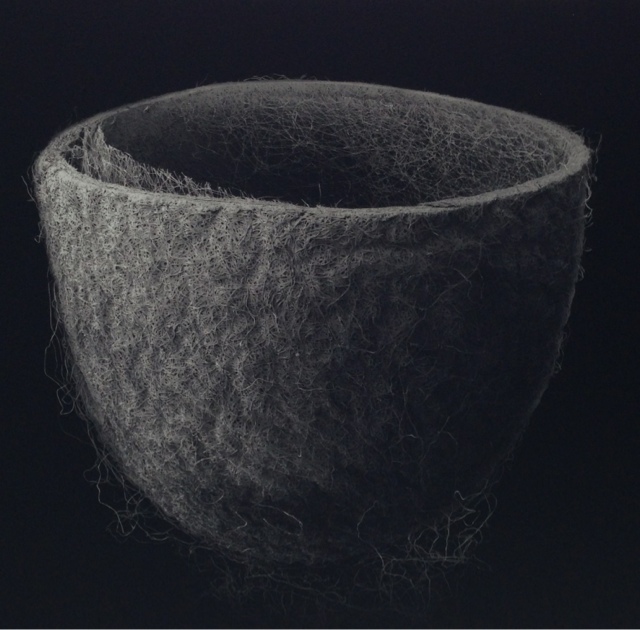 The incredibly accomplished Neri Oxman's from MIT's Media Lab presented on the future of 3D printing at the Biomimicry Conference. This stuff is pretty revolutionary and exciting to me, especially since I really didn't know much about 3D printing. It's a game-changer for sure.

But Oxman pointed out that 3D printing technology is just in its infancy. Right now, it has three serious limitations. First, our materials are primarily non-structural, toxic, and non-degradable plastic resins. No bueno. More sick people and sick environments. Second, the size of the printing "frame," or gantry, limits the size of the object. Third, the printers accrete horizontal layers, one at a time, on top of each other. But of course, that's not how living tissues build themselves.

So, Oxman's team at Mediated Matter invented a freeform 3D printer. It might be the world's first, but they found it too primitive to execute their artistic vision. In the end, they used domesticated silkworms as living 3D printers, a brilliant workaround. The worms "printed" the beautiful Silk Pavilion now hanging in the MIT Media Lab lobby, with "smart" variations in density and patchiness responding to light and substrate. In essence, each silkworm served as an all-in-one biocomputer, programmed by DNA, and freeform printer.

And what about the material in the printer? What could be more eco-friendly than printing with biodegradable silk, produced on-site, simply by feeding the silkworms plant material? We can imagine neighborhood "Maker" shops, creating objects to order with domesticated printers, not unlike a herd of goats or a yogurt 'culture' of microorganisms. Every family might have a carefully tended tank of silkworms or spiders or mushroom mycelium or vines, each bred to execute the simple rules we require for our objects.

It's certainly a compelling sci-fi concept, and food for thought. This idea is 'bio-utilization,' using other species to make our things. Many feel that "Making" (with biomimicry) should instead be a process of learning from other makers. In Janine Benyus' words, "It's time for humans to start making our own materials."

Where and why we want to draw the line on that is a conversation that needs to take place, both within the biomimicry community as well as outside of it. Of course, we depend on domesticated species of all kinds, not just goats and yeast, but the crops we eat and the fibers we wear, the wood we build with, honeybees and silkworms, and even our pets. And nature does it too. Leaf-cutter ants have spent millions of years domesticating a certain fungus, and other ants tend aphids that they have selected for cow-like qualities like moving slowly, being docile, and eating a lot. Domestication is really just a kind of symbiosis. We modify each other. The entire web of life is like that. Is there a difference? I guess we are taking away the other species freedom to choose their own mate and chart their own evolutionary course. But hey. Nobody said life had to be fair now, did they?

There is also the question of how could we feed all those Makers? That's a big question for another day.

In any case, it is incredible to consider the diversity and clean beauty of form and function in natural materials. Can we learn from them, and make our materials "smarter?" Oxman suggested we could print variable-density concrete to provide structure where it is needed and conserve material where it is not, just like bone. And if we could scan and print freeform, could we not print objects perfectly designed by the space itself to fit? Just like living things grow and change to fit their environment? Or, what if we could print with carbon nanotubules, making a 4D printer? This material would change through time, responding to light, heat, force, or humidity to create a "smart" object that adjusts to the environment automatically. Or maybe we can cultivate self-assembling underwater structures from CO2, just like the corals do today? There are so many possibilities, it truly boggles the mind.

For now, the most important thing may be the fact that this is actually going to happen. 3D printing is coming soon to a town near you. It represents a radical opportunity for us to rethink our whole way of life, and we have to do it right. As Janine Benyus said at the end of Oxman's talk, (and I paraphrase) "let's make sure these printers aren't "tiny volcanoes on our desks," creating a new environmentally unsustainable hazard. Let's make sure that we develop and use locally abundant and benign feedstocks," preferably from the excess carbon dioxide in our atmosphere and oceans. Let's make things the way Nature does, digesting our 'products' at the end of their life and feeding them back into the "printer" to make more conditions conducive to life.

You can read more at http://www.triplepundit.com/2013/07/biomimicry/ part 3 of my 5 part series on the 2013 Global Biomimicry Conference!